“Emerging markets represent the biggest growth opportunity in the history of capitalism…
by 2025, annual consumption in emerging markets will reach $30 trillion.”1

TriLinc provides investors with what we believe to be lower risk access to private investment opportunities available in select high-growth economies. At present we operate in Latin America, Southeast Asia, Sub-Saharan Africa and Emerging Europe, in countries with a stable political climate, reliable legal system and growing economy.

Powered by population growth which has more than doubled in the last 50 years, the pace of change in emerging markets has been significant. 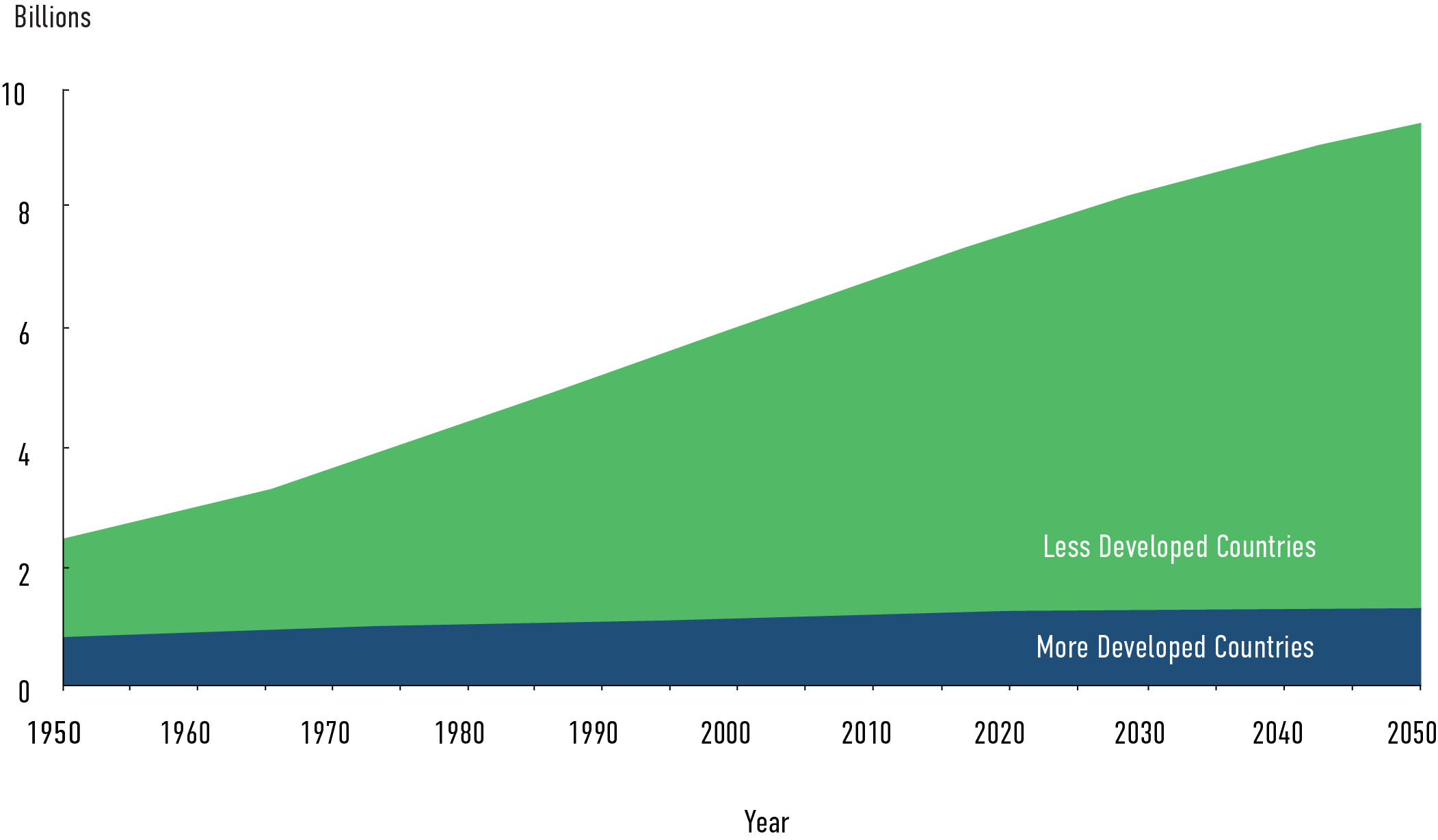 Further supported by long term trends such as the integration of peripheral nations into the global economy, the removal of trade barriers, and the spread of market-oriented economic policies, developing economies have seen strong GDP growth over the last decade and we believe they are positioned to continue to outperform advanced economies well into the future. 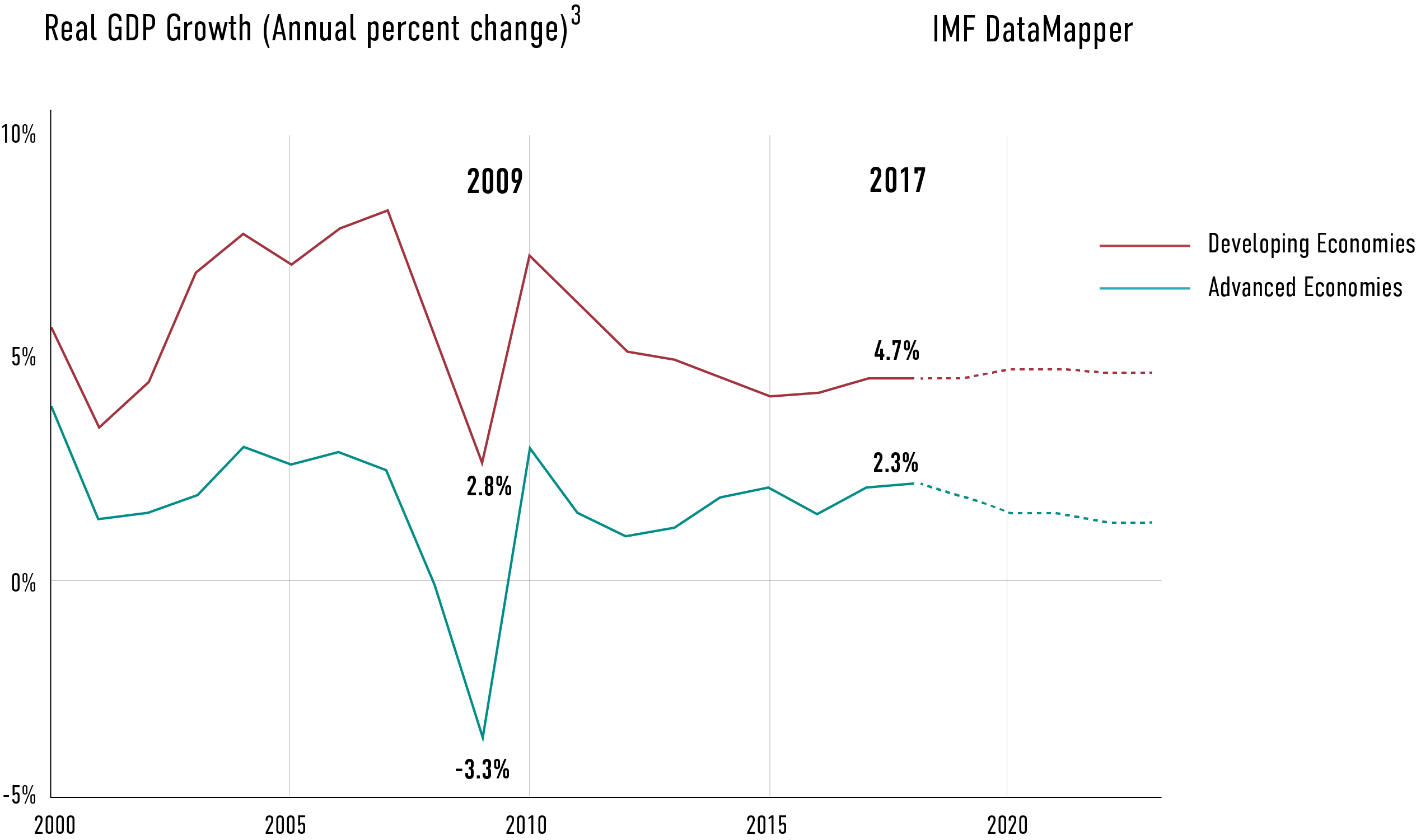 The opportunity for participating in the growth of emerging markets is significant.  The key is how best to access that opportunity.  We believe that making private investments in private companies in select developing economies represent a unique investment opportunity that can offer both a competitive financial return AND the potential to create positive, measurable impact.

Private investments offer the opportunity to obtain alpha through multiple sources, many of which are not available in public market securities:

While SMEs globally are generally underserved by traditional finance institutions, SMEs in developing economies have suffered even more.  Following the global financial crisis, banks worldwide reduced their lending capacity, focusing primarily on more traditional cash flow lending.  While SMEs in more advanced economies benefited from an influx of non-traditional lenders jumping in to fill the gap, the financing gap for SMEs in developing economies widened even further. 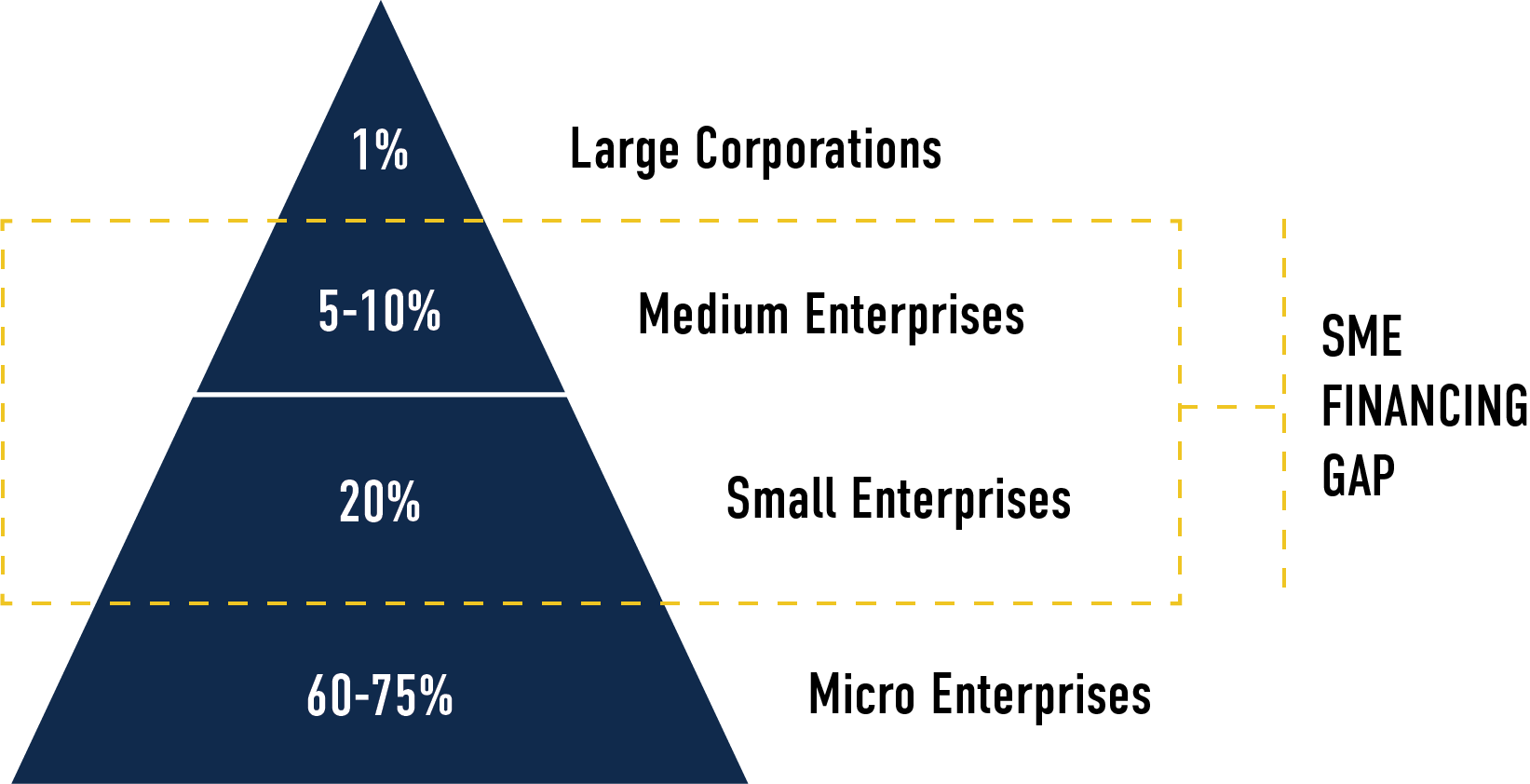 The International Finance Corporation has estimated that unmet demand for SME financing in developing economies is as much as $4.5 trillion.4

TriLinc believes the SME finance market is a growth market. We believe that SMEs are likely to offer attractive investment terms in the form of current cash yield, deferred interest and equity warrants, and more attractive security features such as stricter loan covenants and quality collateral.  Additionally, as compared to larger companies, SMEs often have simpler capital structures and carry less debt, thus aiding the structuring and negotiation process and allowing for greater flexibility in structuring favorable transactions.

Investments in SMEs have a significant impact on local economic development.

While competitive financial returns for TriLinc are our primary focus, we also seek to make a quantifiable development impact with each of our investments.  TriLinc believes significant opportunity exists in financing small and growing businesses, which through expansion, have the ability to hire more employees, produce more goods for local consumption, provide training to locally-based employees and pay more taxes through increased revenues. By increasing the local production of quality goods and services, these businesses can support the growing middle class in those markets.  The Small Enterprise Assistance Funds, or SEAF, who have been investing in developing economy SME’s for over 20 years, have collected large amounts of data on the impact of their investments. The SEAF 2011 Development Impact Report estimated that every $1 invested in an SME, generates an additional $13 in the local economy, and that their investee companies increased employment by an average of 25% per year, versus the 1% national average.

We believe that providing access to growth capital for SMEs in our targeted geographies will drive direct, systematic and long-term economic expansion for the populations most in need.

TriLinc primarily targets investments in countries classified as upper-and lower-middle income by the World Bank. While many of those markets exhibit high levels of growth and strong fundamentals, they are frequently still underdeveloped. By providing financing to the SME sector in these regions, we seek to catalyze economic growth and underpin broad-based social change. This change is realized in many ways, including job creation, increased incomes, and enhanced governmental services due to increased tax contributions. According to the IFC, “helping SME’s in developing countries to grow…lead(s) to income growth and poverty reduction”.

Read about our strategy >